Our earlier post referenced three types of hidden characters that can be typed into a document (spaces, tabs, and paragraph returns). Now looking again at the keyboard we can also highlight those characters that actually leave a visible mark once typed. It is noteworthy that there are rather few keys available. And even expanding this by using the Shift Key, we only come up with a total of 94 visible characters to choose from on the keyboard. Depending on the font style being used, this can be a mere fraction of the total number of font characters that may be available. 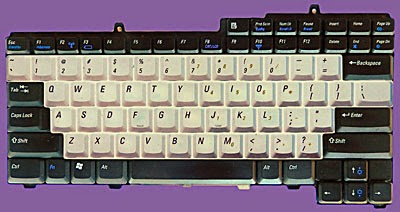 Probably the most familiar font character used that is not found on the keyboard would be bullets. These characters are really no different than a "2" or a "B" - it is just that it is not so easy to add these when one is needed. In addition to various bullet characters, there are also long dashes (en- and em-dashes), ellipsis characters, copyright symbols, dingbats, fraction characters, etc. This expanded set of characters can be extensive though this may be somewhat dependent on what can be found within the font style being used. 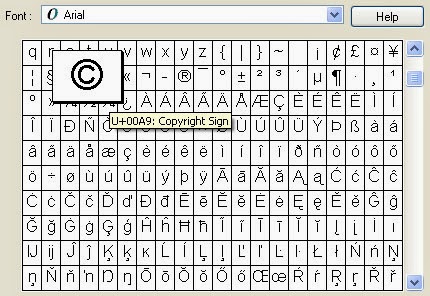 Using Arial font as an example, the above image shows some of the expanded characters that are available. By scrolling down through these I count in excess of 1,400 individual characters. This though is an extreme example given that many of these characters are foreign (which is probably for enabling the computer's operating system to be configured for different languages). That being said, for certain words (such as moiré) maybe some foreign letters would be needed. This will depend on what style decisions are made for the project being typeset. For me, I tend to stay with the language I am writing in - which would be without the accent mark (spelled as "moire," as found throughout our post on Moire Patterns).
Let us focus on some other common expanded characters, such as dashes (verses hyphens); ellipses (versus periods); prime marks (verses quotation marks); and fraction characters. Some of these characters may be found within the font set (as shown above); others are added in other ways. And let us also consider when to use superscript characters for setting type.
~~~

Hyphens or Dashes:
The use of grammatical dashes - as part of a sentence's structure - to divide out independent thoughts contained within a single sentence is tricky. This is not so much from the standpoint of using them in writing (which I would be no expert on) as it is for how they should look once used. And more specific to this, how they should all look. Once a preference is made, care is needed to see that they are all done in the same way.
Traditionally for publishing, the longer em-dashes have been used. Also noteworthy is that this would be without a space character before the dash, and none after the dash. Another option that is becoming more common is to use the shorter en-dash along with a space before and after the dash. The commonality of this may partly be due to certain programs doing this for you automatically as you type. Magically a typed hyphen turns into an en-dash. For examples of grammatical dashes found on this blog site, you will see that actual hyphens are being used (with spaces before and after). Again the main goal is for consistency throughout. And for printed and published works, the preference should be for using either en-dashes or em-dashes.
~~~

Ellipses or Periods:
Ellipses too can be tricky - and again with no thanks given to those programs that will try and include these for you. When typing three periods in sequence, we may end up with some uninvited intervention which replaces them with a single ellipsis character. The difference is that an ellipsis character will show more space between each (as shown above). And yet another option is to do these as a typed period, then a space, then a second period, then a space, and then the third period (which places even more distance between all of the periods). Again the goal is to first establish a preference, and then for consistency throughout, see that they are all the same.
If we were to state a preference, it would be for just the periods without any of the added spacing. Aside from liking the more compact look, there is also the very practical reason for also needing to consider how these will look when accompanied by other added punctuation - such as an actual period, a comma, etc.
~~~

Fraction Characters or Numbers with Slashes:
There is a theme with all of these examples. When typing with certain programs it seems they feel compelled to try and do things for you without your asking! Typing a simple fraction of 1/2 as a "1" followed by a slash, followed by a "2" should be enough. There is no reason why this should be turned into a single character for this fraction (shown above). By checking your font characters you will see that very few fractions are listed as being available to you, which means that if you then type "7/8" it may remain as "7/8" in appearance. Again the goal is for consistency for how all fractions appear.
~~~

Quotation Marks or Primes:
Quotations marks may be the exception for being appreciative towards what programs will do for you when typing. If you notice on the keyboard, single quotes and double quotes are actually prime characters. They are straight up and down lines; they do not have the characteristic curl to the right (for starting a quote) and curl to the left (for ending a quote). Though for math symbols for indicating feet (single prime) or inches (double prime) some may object to the default curls. (See above for examples of the various marks.)
With quotation marks, it is good to also look for those instances where the wrong mark has been inserted. If a space is accidentally typed prior to an ending quotation mark, a beginning mark rather than a closing mark may be the result.
~~~

Superscript or Set Normal:
Though this does not directly relate to fonts and expanded characters, the use of superscript text has a shared concern for doing so consistently. Again thanks to certain programs, you will find that as you type "st" or "nd" or "rd" that they may end up being set as superscript letters. I am not sure who this would be helpful to. The small letters add to the challenge of reading easily and are rather unappealing when found mixed in with the rest of the text. Also, it becomes very difficult to then look through all of the text, for a given project, to see if they all are set in this way. Try a word search on the letters "st" and see how many results you will find that have nothing to do with numbers. Generally it is our recommendation that superscript be only used for source note numbers.
~~~

Wow! It seems I may be coming across a bit bitter towards all those programs that seem to know what we want when we are typing. In most instances, rather than helping, they seem to compound the challenge of having overall consistency with the text. The good news though is that once decisions are made on preferences for how things are to look, there are ways to get things to be as they should be throughout. Find-and-replace tools are very handy for looking for, and then resolving, inconsistencies.
As noted on our introductory page on Text & Typography, many observations and refinements offered when typesetting a project may be similar to, though also very different than, those offered by others. Such scrutiny for matters of font characters probably best fits the tasks and goals of the one who would be doing the final typesetting. As a typographer, for me, it is comforting to then rely on the expertise of others, such as editors and proofreaders, for matters such as the content of what is written and its grammar. Hopefully this way all basses are covered.
~~~
Posted by Keyzine at 12:57 PM