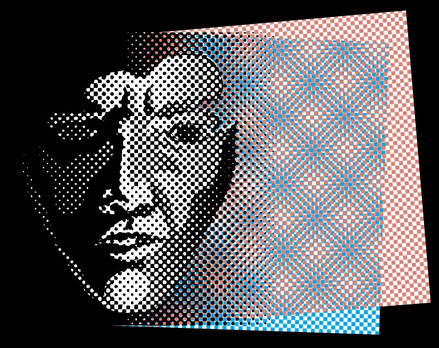 Challenges working with patterns and problems with moire (moiré) patterns

The image above shows halftone dots (black, red and blue) overlapping at skewed angles. Depending on the angles, certain visual patterns appear that are often unpredictable and can cause problems. These are called moire patterns, as is evident in the overlapping areas of blue and red dots. The splotchy and uneven blending of blue and red is caused by the how at times blue dots are beside the the red, and at other times they are on top of each other allowing the white to be seen in the voids.
Prior to going too far with a discussion on moire problems, maybe an explanation is needed for the term halftone which is the process of turning continuous tone images into rows of dots. The original photo in this example (below) consists of gradations of grays (continuous tones). Where cameras may recognize shades of gray and colors when capturing images, printing is limited to using only the full strength (100%) of the color of the ink or toner being used. If black ink is used, the illusion of grays come from using a variety of sizes of small spots of black - as a pattern of halftone dots. For print production, this type of conversion is necessary. Desktop printers, such as some laser printers, also show images as halftone dots. (Other laser printers may use very thin horizontal bands of color rather than dots. Inkjet printers, I guess it could be said, also prints with "spots" though this is very different as they are spread in a much more random and seemingly unorganized way.)

Aside from overlapping of halftone patterns, there are many other instances where moire patterns may appear, and at times, may cause problems. The photo (below) shows an unwanted pattern appearing in the areas of brick with "whitish" looking areas that appear to curve upward like multiple little "smiley faces." This too is a moire pattern and is caused by two conflicting patterns. One is with the pattern of rows of red bricks with layers of white mortar between them. The second is with the rows of pixels being used for this digital image. (See Image Types for more on bitmap images.) The overlapping of these two patterns means that in some areas the pixels are being used to mostly show the mortar (appearing more white) and at other times mostly showing the brick (being darker and more red). 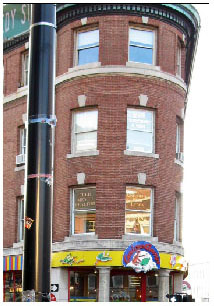 In print production, one of the most common instances of moire problems comes from trying to print images that have already been converted to halftone dots. Examples would be with scans of printed pieces (such as photos from newspapers, magazines, printouts from laser printers, etc.). Subsequent posts will be more specific to how to avoid this from happening. One tool though that may be needed, when photo editing, relates to sharpening of images (see Sharpen Filter).
~~~
Posted by Keyzine at 11:27 AM