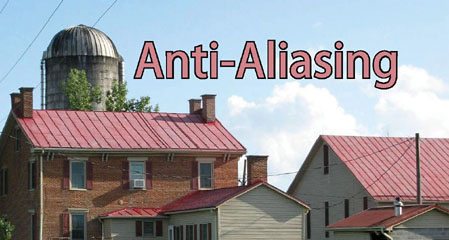 Anti-aliasing of images is a bit tricky to describe, though for compensating for low resolution images, it is a helpful trick to be aware of. As described in an earlier post relating to limitations with resolution for web images, sometimes things can look more clear by being more blurry. Anti-aliasing works in a similar way.
Aliasing refers to the unwanted "jagged" look that can be seen with pixels in high contrast areas of an image. The closeups below show a comparison between an image (top) with aliasing, and one (below) with anti-aliasing. Though the resolution (pixels per inch) is the same for both of these, the one with anti-aliasing appears more clear. 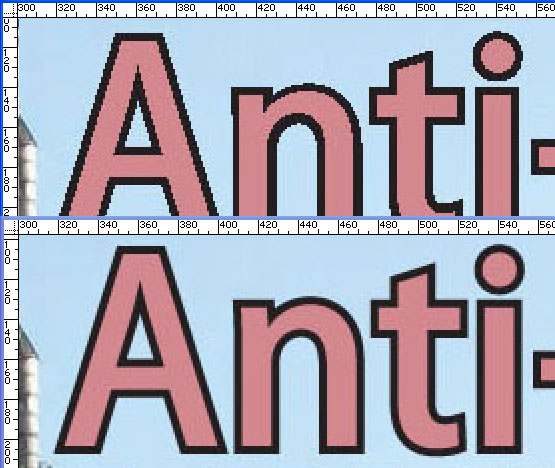 The terminology and methods used for enabling anti-aliasing may differ depending on the program being used. This may be found as an option within paint programs, layout programs, PDF generating settings, settings for merging layers, as filters, as effects, etc. Regardless of how it is found within the programs, the main point of this article is to point out its positive effect when used for certain types of images.
The examples below is from a scanned document which consists primarily of only high contrast text and graphics. By name, "anti-aliasing" was not used through any of the tools or options available to me in the paint program I was using. What was done instead was to adjust the tones of the image in such a way as to manually have less aliasing in the image. 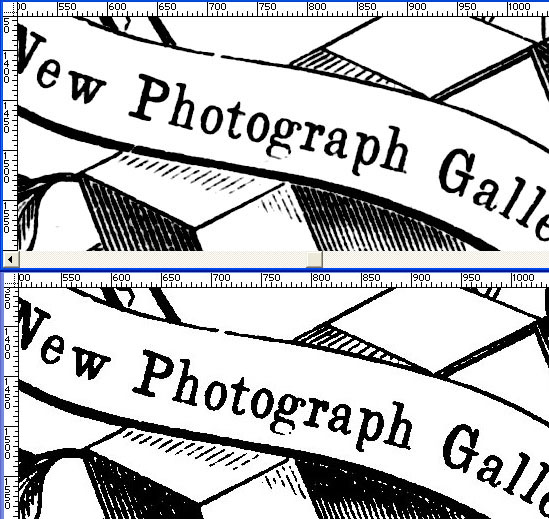 The sample above (top) is with tones adjust to soften the edges between the areas of black and white. Basically some of the gray is allowed to remain as a thin layer of division between the two contrasting colors. If this is removed (second example above), and the tones are adjusted for more contrast between the black and the background white, the image becomes much more "jagged" and rough looking. (And in addition, as seen in the illustrative areas of the image, some detail is lost.) 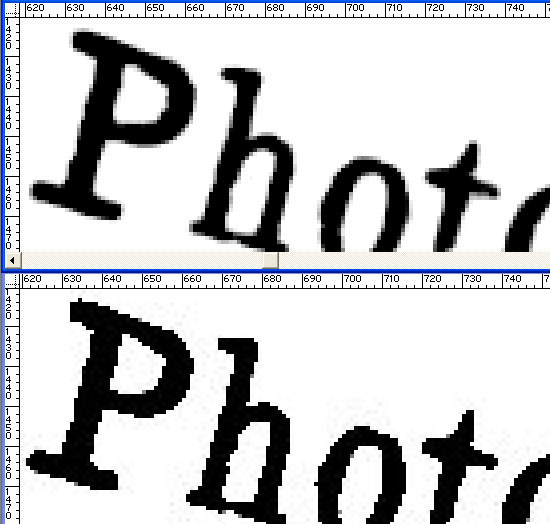 Above is an even closer view that more clearly shows the tones being used between the areas of high contrast. As noted earlier, even though the resolution (pixels per inch) remains the same for each, the illusion of added clarity seems greater for one over the other. It is odd to think that the blurry looking one ends up appearing more clear and detailed.
~~~
Note, earlier post on sharpening filters also relates to perceiving added clarity through seemly odd ways. The two of these kind of go hand-in-hand, and are of interest for both web publishing (where resolution of images is limited) and for print production (for optimizing image quality).
~~~
Posted by Keyzine at 8:09 AM