The labeling of this photo editing trick is a bit odd. The term "unsharpen mask" is a term from days when film was shot and darkrooms were used for processing and printing photographs. The name is misleading though I am sure there was a reason for it at the time. Rather than for making something look more "unsharp" (more blurry and out of focus), it is actually for adding more clarity - to make more "sharp" - with details more pronounced rather than less.
Another fascinating aspect of this trick is that it was evident at a much earlier time as seen in the artwork of Spanish Renaissance painter El Greco (a favorite of mine). Rather than having one area of color align cleanly with another area of a different color, the division between the two can appear more distinct (when seen from a distance) through the use of thin bands of different tones and opposing colors. The result being the illusion and perceiving of added clarity - lines of division between areas becoming more pronounced rather than less.

With a limited amount of sharpening added. Though subtle,
there is some added clarity.

With an extreme amount added. Though drastic in its effect, this example does show how different bands of varying tones are added to bordering areas of shades (such as on porch roof, end of stairs, wall areas around windows, etc.). 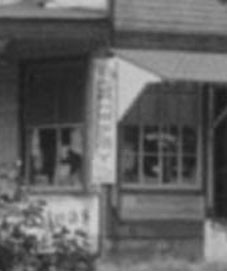 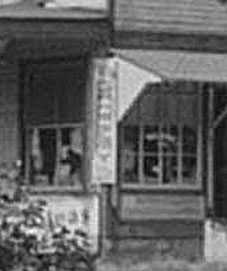 Another before and after example, enlarged.

There is obviously a limit to how much clarity can be artificially added. Those TV programs showing photo editing tricks being used for reading license plates from blurry photos take from miles away, are just a bit too good to be true! This being said, this type of "sharpening" is a handy tool and trick to have for improving clarity with images.
~~~
(Image: family photo, corner store in Sinnemahoning, PA.)
~~~
Posted by Keyzine at 4:18 PM