For examples relating to adjusting tones for highlights, the following photo comes to mind for two reasons. One being the snow, which can add many challenges for tones. The other is for pointing out the effects of highlights when they are found along the edges of the composition - and with realizing that unless there are some printed tones, then the highlight color in the image will be the same as that of the paper. Unless an outlining border is added to the photo, it may create an odd silhouetted shape with its background.

As noted on the Tonal Adjustments & Shadows post, clipping (loss of tonal detail) can occur when scanning photos. In this instance though, maybe the scan captured all that was in the original photo, and the loss was from when the photo was taken with the camera being too flooded with light from the snow. Either way, most of the image is with highlights consisting of white (0% black) pixels. 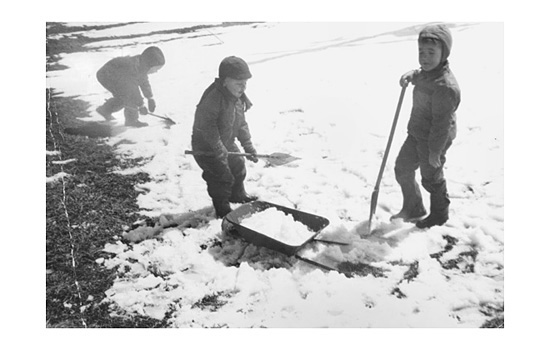 The main adjustment, above, was with the darkening of all highlights. The lightest tone for any of the pixels is now at about 6% black. This should (depending on press tolerances and stock selection) print as a very light gray (almost white) - yielding a silhouetted rectangle shape (of the complete photograph) onto its paper background. Though it may seem odd to make gray something (snow) that was pure white, the result is that the snow still appears as being white and we now have a bit of contrast with all of the photo to its background.
Adjustments were also made to decrease the shadow tones found in certain areas (such as lower left of the shot), and to darken the mid/light tones in others (namely for the snow areas, and select areas of the children). Care was taken to not over compensate so as not to lose the character of the original photo.
~~~
Posted by Keyzine at 11:27 AM